Hercules is one of the standout heroes of Greek mythology, but his namesake constellation can be surprisingly hard to find – despite being one of the largest star patterns in our night skies! Once you find the stars of Hercules, look deeper; barely hidden in the space around his massive limbs and “Keystone” asterism are two beautiful globular star clusters: M13 and M92!

Since the constellation itself is relatively dim but bordered by brighter constellations, you can find the stars of Hercules by looking between the bright stars Vega and Arcturus. They are fairly easy to identify, and we have tips on how to do so in previous articles. Vega is the brightest star in the constellation Lyra and one of the three stars that make up the Summer Triangle (June 2020: Summer Triangle Corner: Vega). Arcturus is the brightest star in the constellation Boötes, and can be found by “arcing to Arcturus” from the handle of the Big Dipper (May 2021: Virgo’s Galactic Harvest).  You may be able to Hercules’s “Keystone” asterism first; this distinct pattern of four stars is traditionally shown as the torso of the great hero, though some illustrators prefer marking the Keystone as the head of Hercules. What pattern do you see in the stars of Hercules?

Globular star clusters appear “fluffy,” round, and dense with stars, similar to a dandelion gone to seed, in contrast to the more scattered and decentralized patterns of open clusters. Open clusters are generally made up of young stars that are gradually spreading apart and found inside our Milky Way galaxy, while globular clusters are ancient clusters of stars that are compact, billions of years old, bound to each other and orbit around our galaxy. Due to their considerable distance, globular clusters are usually only visible in telescopes, but one notable exception is M13, also known as the Great Cluster or Hercules Cluster. During very clear dark nights, skilled observers may be able to spot M13 without optical aid along the border of the Keystone, in between the stars Zeta and Eta Herculis – and a bit closer to Eta. Readily visible as a fuzzy “star” in binoculars, in telescopes M13 explodes with stars and can fill up an eyepiece view with its sparkling stars, measuring a little over half the diameter of a full Moon in appearance!  When viewed through small telescopes, globular clusters can appear orblike and without discernable member stars, similar in appearance to the fuzzy comae of distant comets. That’s why comet hunters Edmund Halley and Charles Messier discovered and then catalogued M13, in 1714 and 1764 respectively, marking this faint fuzzy as a “not-comet” so as to avoid future confusion.

While enjoying your view of M13, don’t forget to also look for M92! This is another bright and bold globular cluster, and if M13 wasn’t so spectacular, M92 would be known as the top celestial sight in Hercules. M92 also lies on the edge of naked-eye visibility, but again, binoculars and especially a telescope are needed to really make it “pop.” Even though M92 and M13 appear fairly close together in the sky, in actuality they are rather far apart: M13’s distance is estimated at about 25,000 light years from Earth, and M92’s at approximately 27,000 light years distant. Since M13 and M92 appear so close together in our skies and relatively easy to spot, switching between these two clusters in your scope makes for excellent star-hopping practice. Can you observe any differences between these two ancient clusters of stars?

Globular clusters are closely studied by astronomers for hints about the formation of stars and galaxies. The clusters of Hercules have even been studied by NASA’s space telescopes to reveal the secrets of their dense cores of hundreds of thousands of stars. Find their latest observations of globular clusters – and the universe – at nasa.gov. 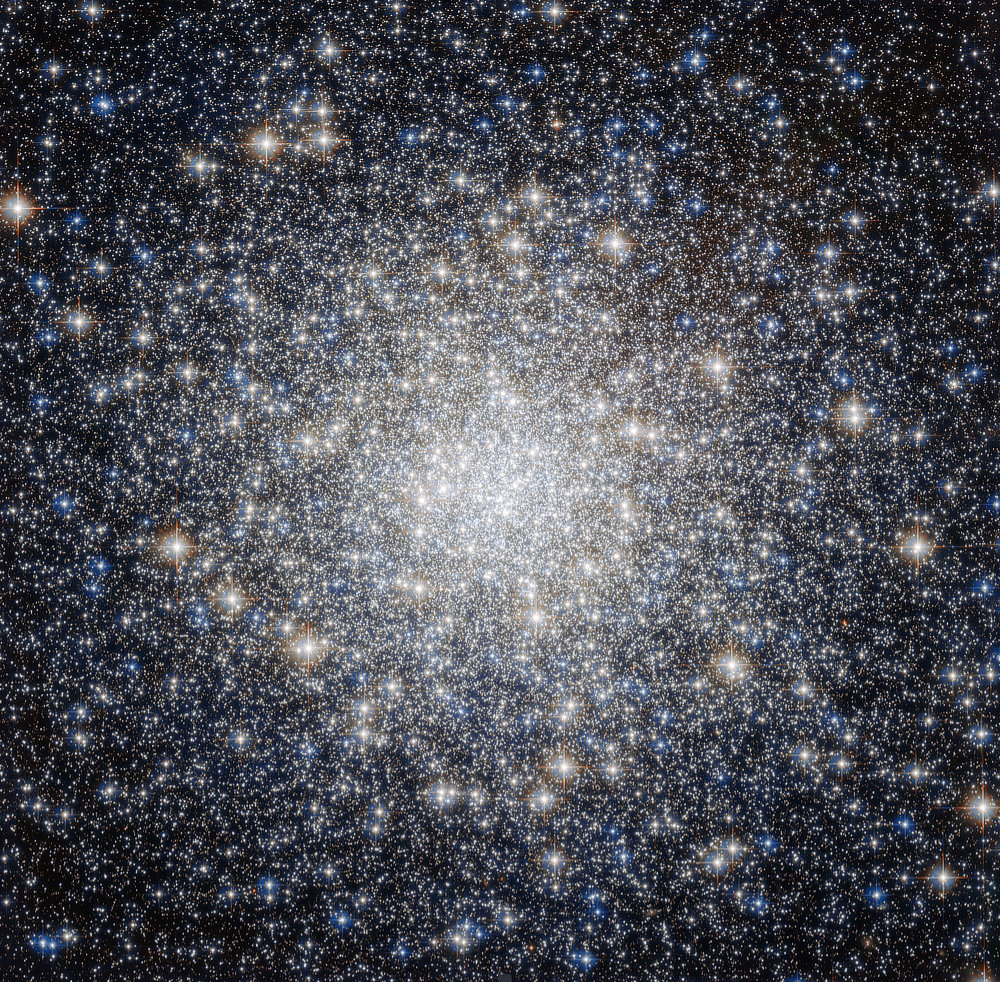 This striking new NASA/ESA Hubble Space Telescope image shows a glittering bauble named Messier 92. Located in the northern constellation of Hercules, this globular cluster — a ball of stars that orbits a galactic core like a satellite — was first discovered by astronomer Johann Elert Bode in 1777. Messier 92 is one of the brightest globular clusters in the Milky Way, and is visible to the naked eye under good observing conditions. It is very tightly packed with stars, containing some 330 000 stars in total. As is characteristic of globular clusters, the predominant elements within Messier 92 are hydrogen and helium, with only traces of others. It is actually what is known as an Oosterhoff type II (OoII) globular cluster, meaning that it belongs to a group of metal-poor clusters — to astronomers, metals are all elements heavier than hydrogen and helium. By exploring the composition of globulars like Messier 92, astronomers can figure out how old these clusters are. As well as being bright, Messier 92 is also old, being one of the oldest star clusters in the Milky Way, with an age almost the same as the age of the Universe. A version of this image was entered into the Hubble’s Hidden Treasures image processing competition by contestant Gilles Chapdelaine. Links Gilles Chapdelaine’s Hidden Treasures entry on Flickr 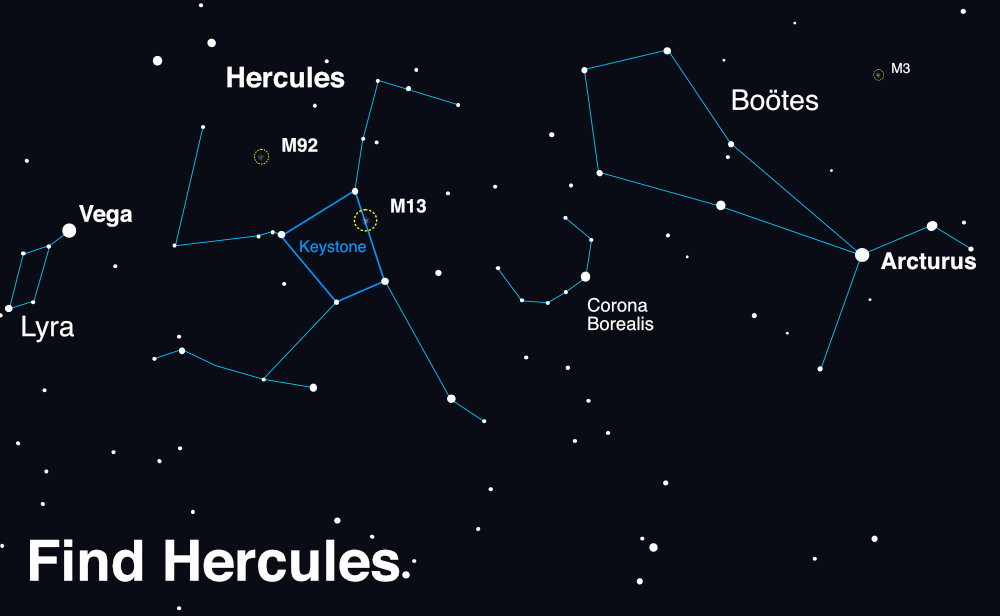 Composite image of the dense starry core of M92 imaged in multiple wavelengths. While your own views of these globular clusters won’t be nearly as crisp and detailed, you might be able to count some of its member stars. How far into their dense cores can you count individual stars?  Credits: ESA/Hubble & NASA; Acknowledgment: Gilles Chapdelaine. Source: https://www.nasa.gov/feature/goddard/2017/messier-92

Look up after sunset during summer months to find Hercules!  Scan between Vega and Arcturus, near the distinct pattern of Corona Borealis. Once you find its stars, use binoculars or a telescope to hunt down the globular clusters M13 and M92. If you enjoy your views of these globular clusters, you’re in luck – look for another great globular, M3, in the nearby constellation of Boötes. Image created with assistance from Stellarium: stellarium.org