Solstices mark the changing of seasons, occur twice a year, and feature the year’s shortest and longest daylight hours – depending on your hemisphere. These extremes in the length of day and night make solstice days more noticeable to many observers than the subtle equality of day and night experienced during equinoxes. Solstices were some of our earliest astronomical observations, celebrated throughout history via many summer and winter celebrations.

Solstices occur twice yearly, and in 2022 they arrive on June 21 at 5:13 am EDT (9:13 UTC), and December 21 at 4:48pm EST (21:48 UTC). The June solstice marks the moment when the Sun is at its northernmost position in relation to Earth’s equator, and the December solstice marks its southernmost position. The summer solstice occurs on the day when the Sun reaches its highest point at solar noon for regions outside of the tropics, and those observers experience the longest amount of daylight for the year. Conversely, during the winter solstice, the Sun is at its lowest point at solar noon for the year and observers outside of the tropics experience the least amount of daylight- and the longest night – of the year. The June solstice marks the beginning of summer for folks in the Northern Hemisphere and winter for Southern Hemisphere folks, and in December the opposite is true, as a result of the tilt of Earth’s axis of rotation. For example, this means that the Northern Hemisphere receives more direct light from the Sun than the Southern Hemisphere during the June solstice. Earth’s tilt is enough that northern polar regions experience 24-hour sunlight during the June solstice, while southern polar regions experience 24-hour night, deep in Earth’s shadow. That same tilt means that the Earth’s polar regions also experience a reversal of light and shadow half a year later in December, with 24 hours of night in the north and 24 hours of daylight in the south. Depending on how close you are to the poles, these extreme lighting conditions can last for many months, their duration deepening the closer you are to the poles.

There is some serious science that can be done by carefully observing solstice shadows. In approximately 200 BC, Eratosthenes is said to have observed sunlight shining straight down the shaft of a well during high noon on the solstice, near the modern-day Egyptian city of Aswan. Inspired, he compared measurements of solstice shadows between that location and measurements taken north, in the city of Alexandria. By calculating the difference in the lengths of these shadows, along with the distance between the two cities, Eratosthenes calculated a rough early estimate for the circumference of Earth – and also provided further evidence that the Earth is a sphere!

Are you having difficulty visualizing solstice lighting and geometry? You can build a “Suntrack” model that helps demonstrate the path the Sun takes through the sky during the seasons; find instructions at stanford.io/3FY4mBm. You can find more fun activities and resources like this model on NASA Wavelength: science.nasa.gov/learners/wavelength. And of course, discover the latest NASA science at nasa.gov. 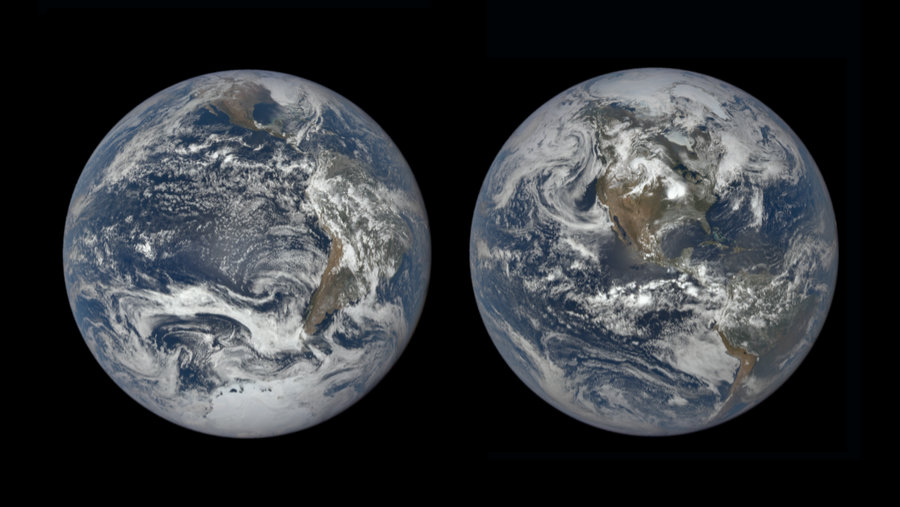 These images from NASA’s DSCOVR mission shows the Sun-facing side of Earth during the December 2018 solstice (left) and June 2019 solstice (right). Notice how much of each hemisphere is visible in each photo; December’s solstice heavily favors the Southern Hemisphere and shows all of South America and much of Antarctica and the South Pole, but only some of North America. June’s solstice, in contrast, heavily favors the Northern Hemisphere and shows the North Pole and the entirety of North America, but only some of South America.

A presenter from the San Antonio Astronomy Club in Puerto Rico demonstrating some Earth-Sun geometry to a group during a “Zero Shadow Day” event.  As Puerto Rico lies a few degrees south of the Tropic of Cancer, their two zero shadow days arrive just a few weeks before and after the June solstice. Globes are a handy and practical way to help visualize solstices and equinoxes for large outdoor groups, especially outdoors during sunny days!