Leo is a prominent sight for stargazers in April. Its famous sickle, punctuated by the bright star Regulus, draws many a beginning stargazer’s eyes, inviting deeper looks into some of Leo’s celestial delights, including a great double star and a famous galactic trio.

Leo’s distinctive forward sickle, or “reverse question mark,” is easy to spot as it climbs the skies in the southeast after sunset. If you are having a difficult time spotting the sickle, look for bright Sirius and Procyon – featured in last month’s article – and complete a triangle by drawing two lines to the east, joining at the bright star Regulus, the “period” in the reverse question mark. Trailing them is a trio of bright stars forming an isosceles triangle, the brightest star in that formation named Denebola. Connecting these two patterns together forms the constellation of Leo the Lion, with the forward-facing sickle being the lion’s head and mane, and the rear triangle its hindquarters. Can you see this mighty feline? It might help to imagine Leo proudly sitting up and staring straight ahead, like a celestial Sphinx.

If you peer deeper into Leo with a small telescope or binoculars, you’ll find a notable double star! Look in the sickle of Leo for its second-brightest star, Algieba – also called Gamma Leonis. This star splits into two bright yellow stars with even a small magnification – you can make this “split” with binoculars, but it’s more apparent with a telescope. Compare the color and intensity of these two stars – do you notice any differences? There are other multiple star systems in Leo – spend a few minutes scanning with your instrument of choice, and see what you discover.

One of the most famous sights in Leo is the “Leo Triplet”: three galaxies that appear to be close together. They are indeed gravitationally bound to one another, around 30 million light years away! You’ll need a telescope to spot them, and use an eyepiece with a wide field of view to see all three galaxies at once! Look below the star Chertan to find these galaxies. Compare and contrast the appearance of each galaxy – while they are all spiral galaxies, each one is tilted at different angles to our point of view! Do they all look like spiral galaxies to you?

April is Citizen Science Month, and there are some fun Leo-related activities you can participate in! If you enjoy comparing the Triplets, the “Galaxy Zoo” project (galaxyzoo.org) could use your eyes to help classify different galaxies from sky survey data! Looking at Leo itself can even help measure light pollution: the Globe at Night project (globeatnight.org) uses Leo as their target constellation for sky quality observations from the Northern Hemisphere for their April campaign, running from April 3-12. Find and participate in many more NASA community science programs at science.nasa.gov/citizenscience. Happy observing!

The stars of Leo: note that you may see more or less stars, depending on your sky quality. The brightness of the Leo Triplet has been exaggerated for the purposes of the illustration – you can’t see them with your unaided eye. 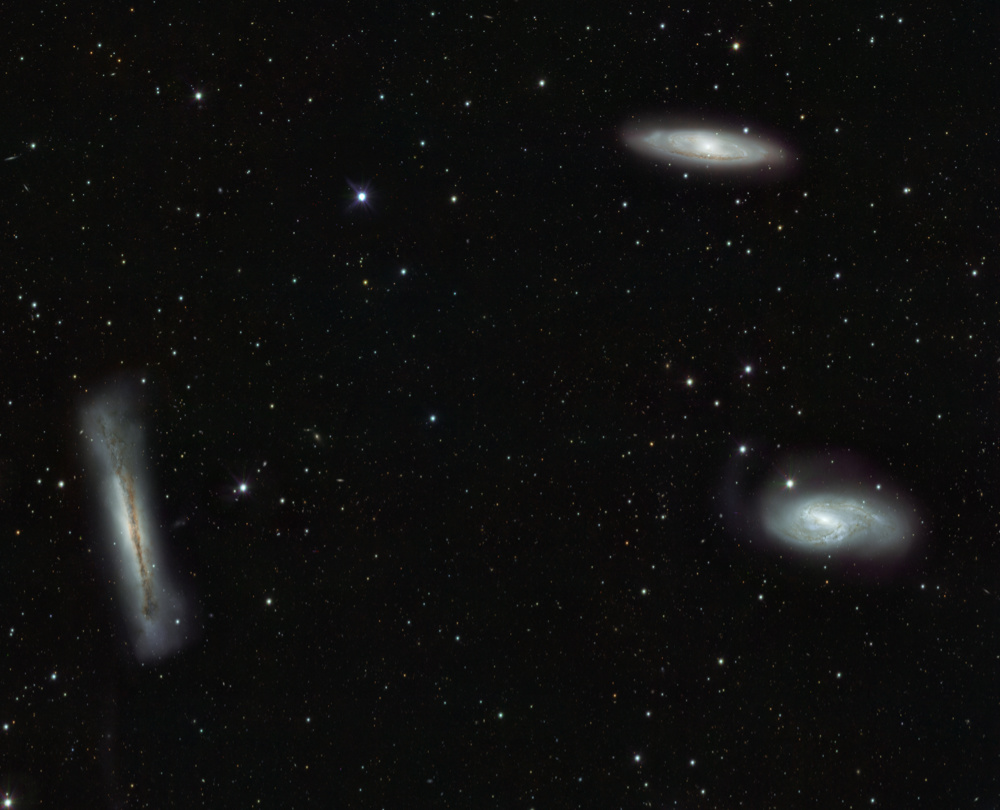 Your view of the three galaxies in the Leo Triplet won’t look as amazing as this image taken by the VLT Survey Telescope, unless you have a telescope with a mirror 8 feet or more in diameter! Still, even a small telescope will help your eyes pick up these three galaxies as “faint fuzzies”: objects that seem blurry against a background of pinpoint stars. Let your eyes relax and experiment with observing these galaxies by looking slightly away from them, instead of looking directly at them; this is called averted vision, a handy technique that can help you see details in fainter, more nebulous objects.