March skies feature many dazzling stars and constellations, glimmering high in the night, but two of the brightest stars are the focus of our attention this month: Sirius and Procyon, the dog stars!

Sirius is the brightest star in the nighttime sky, in large part because it is one of the closest stars to our solar system at 8.6 light years away. Compared to our Sun, Sirius possesses twice the mass and is much younger. Sirius is estimated to be several hundred million years old, just a fraction of the Sun’s 4.6 billion years. Near Sirius – around the width of a hand with fingers splayed out, held away at arm’s length – you’ll find Procyon, the 8th brightest star in the night sky. Procyon is another one of our Sun’s closest neighbors, though a little farther away than Sirius, 11.5 light years away. While less massive than Sirius, it is much older and unusually luminous for a star of its type, leading astronomers to suspect that it may “soon” – at some point millions of years from now – swell into a giant star as it nears the end of its stellar life.

Sirius and Procyon are nicknamed the “Dog Stars,” an apt name as they are the brightest stars in their respective constellations – Canis Major and Canis Minor – whose names translate to “Big Dog” and ”Little Dog.”  Not everyone sees them as canine companions. As two of the brightest stars in the sky, they feature prominently in the sky stories of cultures around the world. Sirius also captures the imaginations of people today: when rising or setting near the horizon, its brilliance mixes with our atmosphere’s turbulence, causing the star’s light to shimmer with wildly flickering color. This vivid, eerie sight was an indication to ancient peoples of changes in the seasons, and even triggers UFO reports in the modern era!

Both of these bright stars have unseen companions: tiny, dense white dwarf stars, the remnants of supermassive companion stars. Interestingly, both of these dim companions were inferred from careful studies of their parent stars’ movements in the 1800s, before they were ever directly observed! They are a challenging observation, even with a large telescope, since their parent stars are so very bright that their light overwhelms the much dimmer light of their tiny companions. The white dwarf stars, just like their parent stars, have differences: Sirius B is younger, brighter, and more energetic than Procyon B. Careful observations of these nearby systems over hundreds of years have helped advance the fields of: astrometry, the precise measurement of stars; stellar evolution; and astroseismology, the study of the internal structure of stars via their oscillations. Discover more about our stellar neighborhood at nasa.gov! 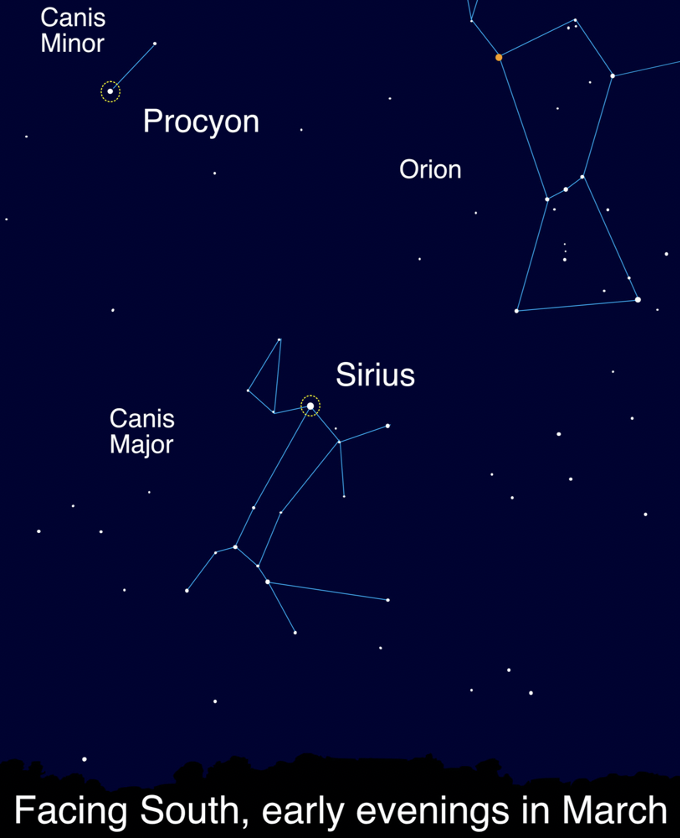 Sirius and Procyon, the loyal hunting dogs of nearby Orion the Hunter! What other stories can you imagine for these stars?  Learn about “Legends in the Sky” and create your own with this activity: https://bit.ly/legendsinthesky     Image created with assistance from Stellarium. 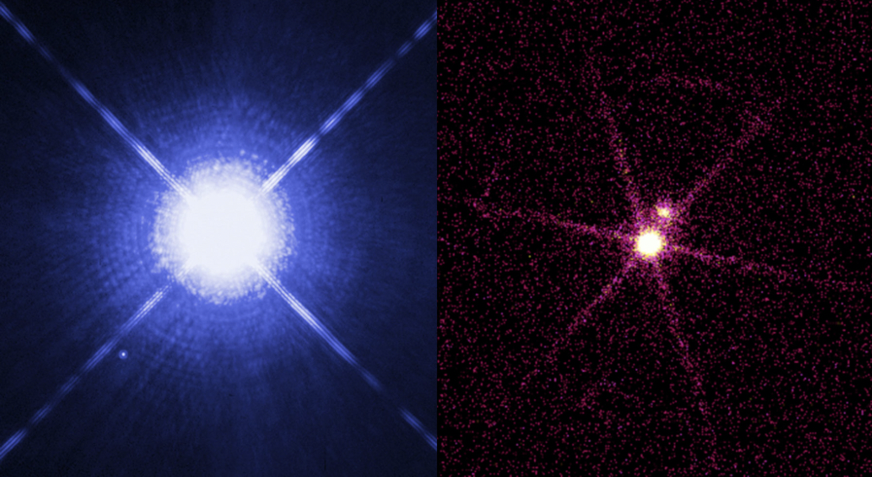