Have you observed Jupiter and Saturn moving closer to each other over the past few months? On December 21, the two worlds will be at their closest, around 1/5 of a full Moon apart! While the two gas giants may appear close, in reality they are hundreds of millions of miles apart. Despite this vast distance, a select few missions have visited both worlds by using a gravity assist from giant Jupiter to slingshot them towards Saturn, saving time and fuel.

Pioneer 11 was the first mission to visit both worlds! Launched in 1973, the probe flew past Jupiter in late 1974, passing just 26,4000 miles above its stormy clouds. In 1979, it became the first spacecraft to encounter Saturn. Pioneer 11 took the first up-close photos of Saturn and its satellites, and made many exciting discoveries, including the detections of its magnetic field and a faint “F” ring, before departing Saturn and eventually, the solar system.

The Voyager missions quickly followed up, taking a “Grand Tour” of the four largest and most distant planets in our solar system. Both probes were launched within two weeks of each other in 1977. Voyager 1 flew past Jupiter in March 1979, discovering Jupiter’s faint ring and two new moons, along with active volcanoes on Io’s surface! The probe then flew past Saturn in November 1980, discovering five new moons, a new “G” ring, mysterious ring “spokes,” and “shepherd moons” shaping the rings. After a brief encounter with Titan revealed evidence of complex organic chemistry and liquid on the moon’s frigid surface, Voyager 1 was flung out of the plane of the solar system. Following close behind, Voyager 2 took detailed photos of Jupiter’s moons and cloud tops in July 1979. Flying past Saturn in August 1981, Voyager 2 measured the thickness of Saturn’s rings and took detailed photos of many of its moons. This second explorer then captured images of Uranus and Neptune before leaving our solar system.

Cassini-Huygens was the last mission to visit both worlds. Launched in 1997, the mission flew past Jupiter in late 2000 and took incredibly detailed photos of its stormy atmosphere and faint rings. Cassini entered into Saturn’s orbit on July 1, 2004. The Huygens probe separated from Cassini, landing on Titan to become the first probe in the outer solar system. Cassini discovered geysers on Enceladus, fine details in Saturn’s rings, many more moons and “moonlets,” the changing oceans of Titan, and seasonal changes on Saturn itself. After revolutionizing our understanding of the Saturnian system, Cassini’s mission ended with a fiery plunge into its atmosphere on September 15, 2017. 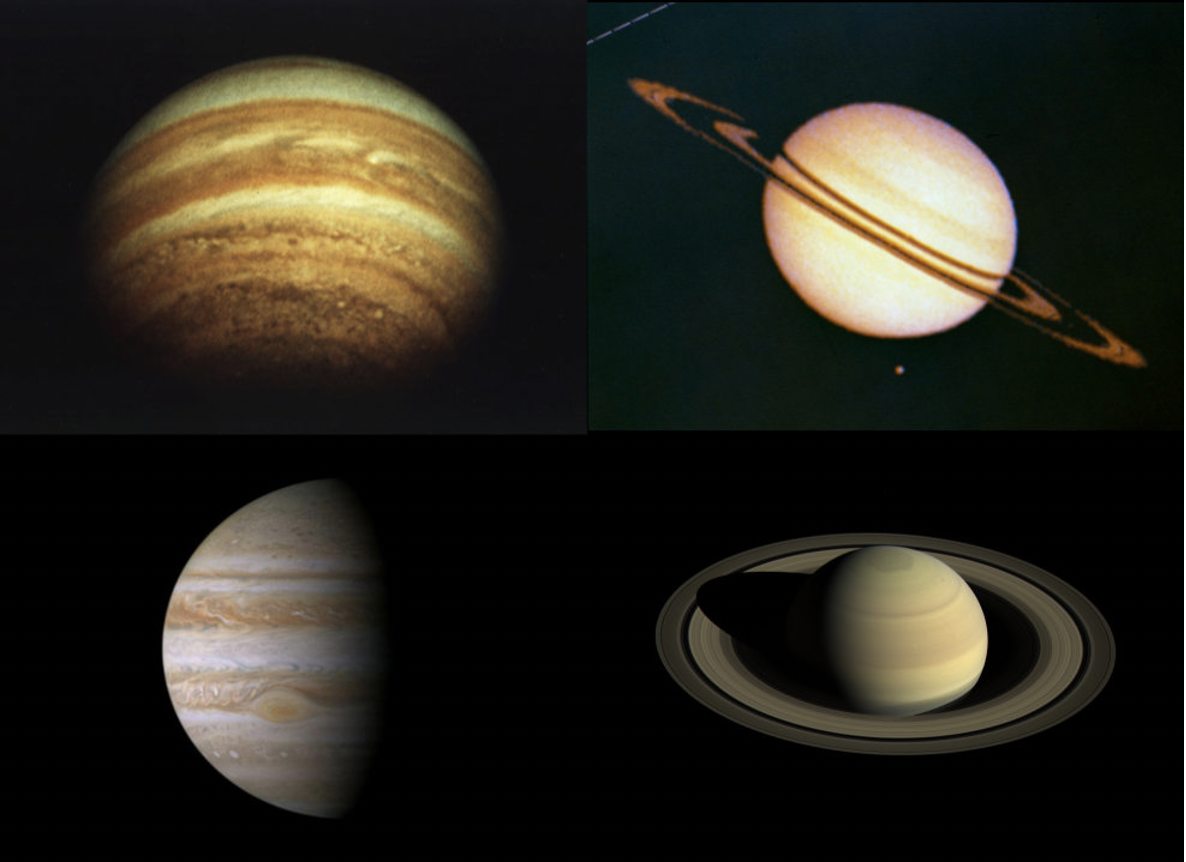