October is a banner month for Mars observers! October 6 marks the day Mars and Earth are at closest approach, a once-every-26-months event. A week later, on October 13, Mars is at opposition and up all night. Mars is very bright this month, and astronomers are eager to image and directly observe details on its disc; however, don’t forget to look at the space around the planet, too! By doing so, you can observe the remarkable retrograde motion of Mars and find a few nearby objects that you may otherwise overlook.

Since ancient times, Mars stood out to observers for its dramatic behavior. Usually a noticeable but not overly bright object, its wandering path along the stars showed it to be a planet instead of a fixed star. Every couple of years, this red planet would considerably flare up in brightness, for brief times becoming the brightest planet in the sky before dimming back down. At these times, Mars would also appear to slow down its eastward motion, stop, then reverse and head westward against the stars for a few weeks, before again stopping and resuming its normal eastward movement. This change in the planet’s movement is called “apparent retrograde motion.” While all of the planets will appear to undergo retrograde motion when observed from Earth, Mars’s retrograde appearances may be most dramatic. Mars retrograde motion in 2020 begins on September 10, and ends on November 16. You can observe its motion with your eyes, and it makes for a fun observing project! You can sketch the background stars and plot Mars as you observe it night after night, or set up a photographic series to track this motion. Does the planet move at the same rate night after night, or is it variable? As you observe its motion, note how Mars’s brightness changes over time. When does Mars appear at its most brilliant?

NASA has tons of great Mars-related resources! Want to know more about apparent retrograde motion? NASA has an explainer at: bit.ly/marsretromotion. Find great observing tips in JPl’s “What’s Up?” videos: bit.ly/jplwhatsup. Check out detailed views with NASA’s HiRISE satellite, returning stunning closeups of the Martian surface since 2006: hirise.lpl.arizona.edu. NASA’s Curiosity Rover will be joined in a few months by the Perseverance Rover, launched in late July to take advantage of the close approach of Mars and Earth, a launch window that opens two years: nasa.gov/perseverance.  Calculate the ideal launch window yourself with this handy guide: bit.ly/marslaunchwindow. The Night Sky Network‘s Exploring Our Solar System handout invites you to chart the positions of the planets in the Solar System, and NSN coordinator Jerelyn Ramirez recently contributed an update featuring Mars opposition! You can download both versions at bit.ly/exploresolarsystem. Young astronomers can find many Mars resources and activities on NASA’s Space Place: bit.ly/spaceplacemars. Here’s to clear skies and good seeing for Mars’s best appearance until 2033! 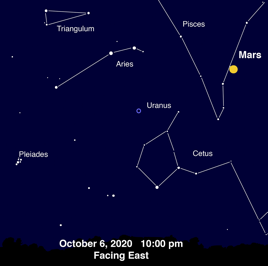 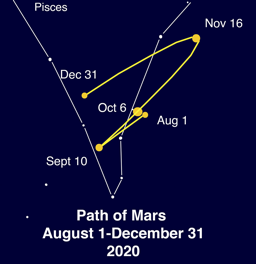 (left) If you are paying this much attention to Mars, you’re likely curious about the skies surrounding it! Find Mars in the constellation Pisces, with constellations Aries, Triangulum, and Cetus nearby. Aries may be the only one of these dimmer patterns readily visible from light-polluted areas. The Pleiades rises shortly after Mars. Dim Uranus is found close by, in Aries. If you are observing Mars up close, use the same eyepiece to check out Uranus’s tiny blue-green disc. If you are uncertain whether you spotted Uranus, you didn’t see it! Unlike stars, Uranus doesn’t resolve to a point at high magnifications.

(right) The path of Mars during the last five months of 2020. Notice the retrograde motion from September 10 to November 16, with prime Mars observing time found in between. October 6 is the day of closest approach of Earth and Mars, “just” 38.6 million miles apart. Images created with help from Stellarium: stellarium.org