Did you know that there are two other objects in our skies that have phases like the Moon? They’re the inner planets, found between Earth and the Sun: Mercury and Venus. You can see their phases if you observe them through a telescope. Like our Moon, you can’t see the planets in their “new” phase, unless they are lined up perfectly between us Earthlings and the Sun. In the case of the Moon, this alignment results in a solar eclipse; in the case of Mercury and Venus, this results in a transit, where the small disc of the planet travels across the face of the Sun. Skywatchers are in for a treat this month, as Mercury transits the Sun the morning of November 11!

You may have seen the transit of Venus in 2012; you may have even watched it through eclipse glasses! However, this time you’ll need a solar telescope to see anything, since eclipse glasses will only reveal the Sun’s blank face. Why is that? Mercury is the smallest planet in our solar system, and closer to the Sun (and further away from Earth) during its transit than Venus was in its 2012 transit. This makes Mercury’s disc too small to see without the extra power of a telescope. Make absolutely certain that you view the transit via a telescope equipped with a safe solar filter or projection setup. Do NOT combine binoculars with your eclipse glasses; this will instantly burn a hole through the glasses – and your eyes! While most people don’t have solar telescopes handy, many astronomy clubs do! Look for clubs hosting Mercury transit observing events near you at bit.ly/findnsn (USA) or at bit.ly/awbtransit (worldwide).

What a fun opportunity to see another planet during the day! This transit is expected to last over five hours. Folks on the East Coast will be able to watch the entre transit, weather permitting, from approximately 7:35 am EST until around approximately 1:04 pm EST. Folks located in the middle of North America to the west coast will see the transit already in progress at sunrise. The transit takes hours, so if your weather is cloudy, don’t despair; there will be plenty of time for skies to clear! You can find timing details and charts via eclipse guru Fred Espenak’s website: bit.ly/mercurytransit2019

Mercury’s orbit is small and swift, and so its position in our skies quickly changes; that’s why it was named after the fleet-footed messenger god of Roman mythology. In fact, if you have a clear view of the eastern horizon, you’ll be able to catch Mercury again this month! Look for it before dawn during the last week of November, just above the eastern horizon and below red Mars. Wake up early the morning of November 24th to see Mars, the Moon, and Mercury form a loose triangle right before sunrise.

Discover more about Mercury and the rest of our solar system at nasa.gov 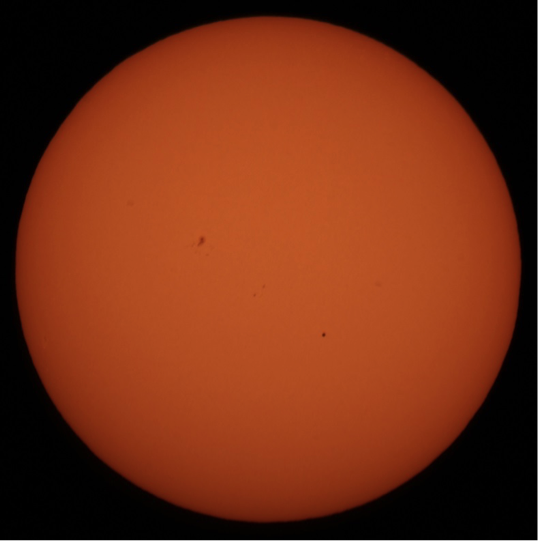 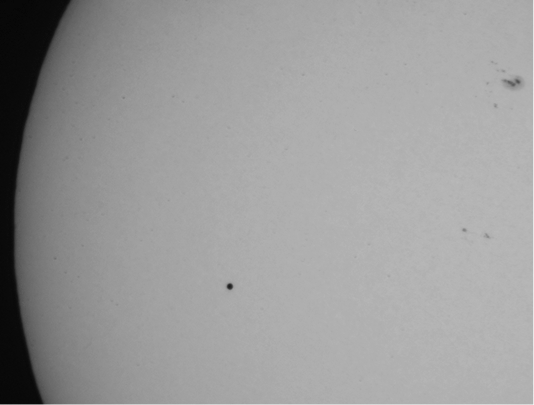 This photo from the same 2016 transit event shows Mercury a bit larger, as it should; it was taken at a higher magnification through a large 16 inch telescope! Credit: J. A. Blackwell