Most of the planets in our solar system are bright and easily spotted in our night skies. The exceptions are the ice giant planets: Uranus and Neptune. These worlds are so distant and dim that binoculars or telescopes are almost always needed to see them. A great time to search for Uranus is during its opposition on October 28, since the planet is up almost the entire night and at its brightest for the year.

Search for Uranus in the space beneath the stars of Aries the Ram and above Cetus the Whale. These constellations are found west of more prominent Taurus the Bull and Pleiades star cluster. You can also use the Moon as a guide! Uranus will be just a few degrees north of the Moon the night of October 14, close enough to fit both objects into the same binocular field of view. However, it will be much easier to see dim Uranus by moving the bright Moon just out of sight. If you’re using a telescope, zoom in as much as possible once you find Uranus; 100x magnification and greater will reveal its small greenish disc, while background stars will remain points.

Try this observing trick from a dark sky location. Find Uranus with your telescope or binoculars, then look with your unaided eyes at the patch of sky where your equipment is aimed. Do you see a faint star where Uranus should be? That’s not a star; you’re actually seeing Uranus with your naked eye! The ice giant is just bright enough near opposition – magnitude 5.7 – to be visible to observers under clear dark skies. It’s easier to see this ghostly planet unaided after first using an instrument to spot it, sort of like “training wheels” for your eyes. Try this technique with other objects as you observe, and you’ll be amazed at what your eyes can pick out.

By the way, you’ve spotted the first planet discovered in the modern era! William Herschel discovered Uranus via telescope in 1781, and Johan Bode confirmed its status as a planet two years later. NASA’s Voyager 2 is the only spacecraft to visit this strange world, with a brief flyby in 1986. It revealed a strange, severely tilted planetary system possessing faint dark rings, dozens of moons, and eerily featureless cloud tops. Subsequent observations of Uranus from powerful telescopes like Hubble and Keck showed its blank face was temporary, as powerful storms were spotted, caused by dramatic seasonal changes during its 84-year orbit. Uranus’s wildly variable seasons result from a massive collision billions of years ago that tipped the planet to its side.

Discover more about NASA’s current and future missions of exploration of the distant solar system and beyond at nasa.gov 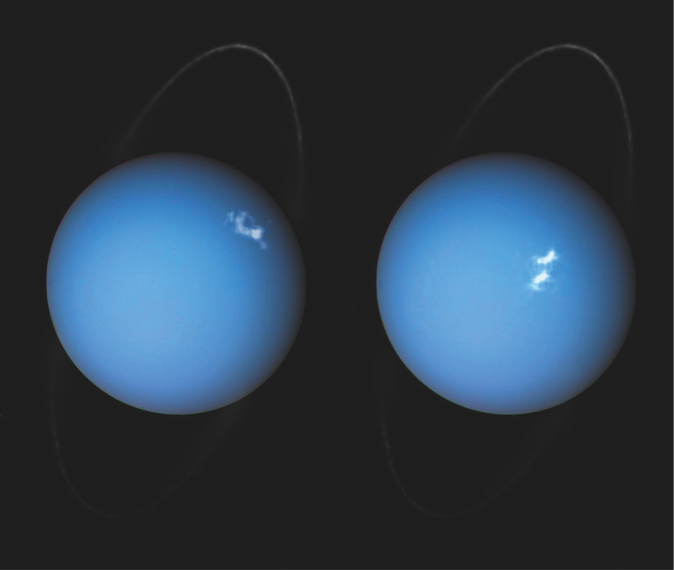 Caption: The path of Uranus in October is indicated by an arrow; its position on October 14 is circled. The wide dashed circle approximates the field of view from binoculars or a finderscope. Image created with assistance from Stellarium. 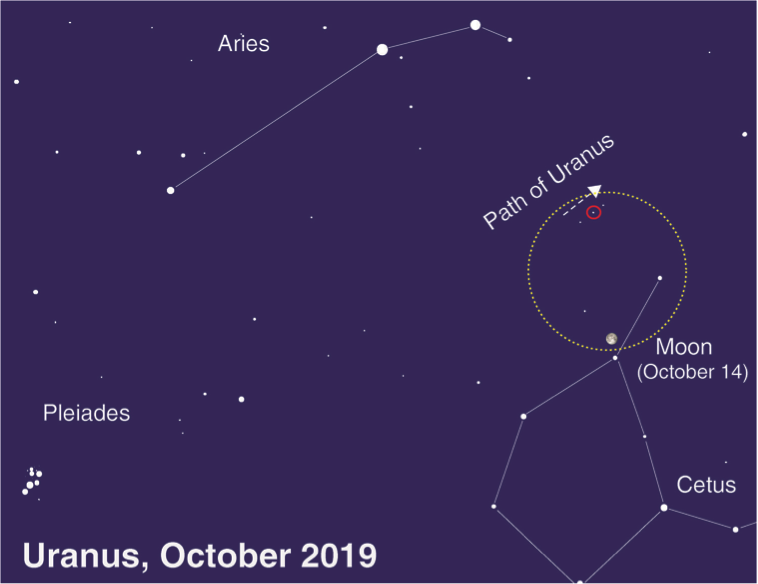