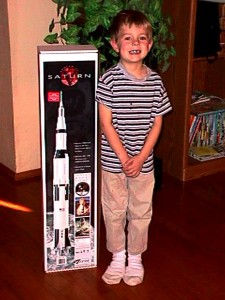 This is a story about a BAR (Born Again Rocketeer) who as a child did not afford a Saturn V. This may seem funny but I worked in a Toy store from 1976 till 1979. That is what started my rocket career.

You see, once upon a time there was this young lad named Tony. While he was painting a fire hydrant for the upcoming 200 year anniversary of our country, he took a break in a toy store near the hydrant. This lad noticed that the model rockets were in bad disarray. He began organizing the rockets. I, err I mean he was getting all the Mosquitos on the same hook when an old man walked up behind him. “Whatch’a doin’ son?” he inquired. I was raised in the mid west (Iowa) and I explained “These rockets are a mess. I am organizing them.” He announced “You’re doing a fine job, you want it?” “Want what?” I replied. “The job. It pays minimum wage but that should keep you in rockets.” 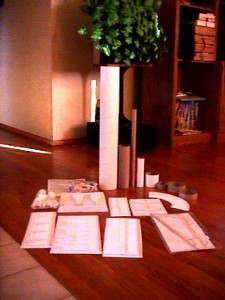 I didn’t know anything about rockets then but soon I was buying all the rockets I could. I read the instructions and few at my school. I never did buy a Saturn V. I believe that I was scared of it. It was a big expensive rocket. I had flown clusters before (3 c’s in the Eggpress egg lofter) and I had flown taller rockets (Mean Machine) but I never did buy a Saturn V.

So now we get to the 30th anniversary Saturn V. As soon as I found out that the emanate release of the Saturn V was not just rumor, I submitted my order with Hobby Link. Http://www.hobbylinc.com Mine was delivered December 26th. I had made my wife a promise that I would not start building any new rockets until in installed her new floor in the kitchen. Talk about a motivator. She now has her new floor and cabinets. So then I got to start the rocket.

It came in a sturdy NCR style box. Kevon was most impressed that it was nearly as tall as he is. Once I opened the box, I was impressed by the number of parts. I love hard to build kits. The more difficult the better. Soon I discovered that not all the parts will be used. The Vacu formed plastic wraps have duplicate hard plastic pieces that do not get used.

Upon taking inventory of the parts, I was unable to correctly identify two of them. The Main Body Coupler verses the Reinforcing Ring. (Shown on floor back right.) I correctly decided that the Main Body Tube Coupler was the longer (taller) of the two. I never did find a use for the Reinforcing Ring. I ended up using it in the top of the body tube to help stiffen the tube where it couples to the next stage.

My next issue was that I don’t like flying to 175 feet. Long delay element and my rocket hits the ground. I felt that a rocket of this size needs to fly at least 500 feet. I toyed with the idea of just flying it in 24mm RMS. (Reloadable Motor System) rocket motors. That would have met my goal. But after checking my parts inventory and I had a 29mm motor tube on hand, well it just had to be. I got out my Dr. Rockets LDRS XVII commemorative 29mm 240NSec case and made sure it would fit in my new motor mount. Green is the Dr. Rockets RMS casing, the white is the new 29mm motor tube and the kraft paper tube is the original motor tube. Now I’m really looking forward to seeing his go up on a G33 or bigger motor.

My next problem was re-cutting the centering rings for the 29mm tube. Fortunately my wife Sheryl has a craft circle cutter from Fiskar
http://www.fiskars.com/memories/prod_circle_cutter.html If you get one be sure to check it’s 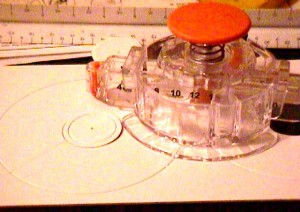 scale. The metric scale on our’s is off by a factor of two. So instead of a 31mm (Outside Diameter of my 29mm tube) diameter, I had to set it for 62mm. The hardest part was finding the original centers so I could then cut my new holes.

The next problem was to adjust my CG (Center of Gravity) for the new motor size. I put 1 ounce of BB’s inside the command module. I made this guess by building the rocket then put a D motor in the rocket. I found CG and then replaced it with my 29mm 240NSec case and a H220 reload. Then I added weight to bring CG back to the proper location. I’m confident that this rocket will never hold up to an H220 but I might fly it on an H97 one day. Want to watch?

I had no problem with the instructions until I got to step 9. Cutting the Lower 1st stage wrapper. It tells you to cut it 3″ long. But its not very specific about where to measure 3″ at. In any case it’s wrong. I’m going to recommend that you got to step 11 first. Cut out the fairings but not the holes for the fins just yet. Return to step 9. Wrap a piece of 120 or 220 grit sand paper around your body tube. Use that to sand your fairings to the correct shape. Carefully slide them up and down the sandpaper on the body tube to get the correct curvature. Once you have them fitting the body tube it’s time to pick out the one that is the longest. They should be close but one will inevitably be longer. I would then cut the lower 1st stage wrapper as large as I could. Then tape it onto the body tube and use the long fairing to measure your final cut. Try each fairing in turn to make sure your mark is accurate and you won’t leave the wrapper too short. If your’s ends up being too short. Well, that is where I used Green Putty to fix my mistakes.

I now have my rocket assembled and it’s first coat of primer on it. In the coming months I plan to put the new counter on my wife’s new cabinets and paint this rocket properly. I also need to replace the chutes with nylon due to the added recovery weight of the RMS and the 1 ounce of BB’s in the nose.