In the following article, I will tell you about my experience with rocketry in my sixth grade class. How I watched the other kids learn about rockets and learned some things as well. How I built and painted a rocket with someone that was not related to me. Last but definitely not least, the look on the other kids faces when the rockets launched on launch day.

One of the things I learned in class was that rockets were based off of missiles. Missiles were over-sized fireworks before fins helped flying projectiles fly straight. The V2 rocket was the first actual missile. The German scientists that made it helped both Russia and the U.S.A. with their space programs. I learned rockets can save lives as well. Rocket-powered ejection seats can get pilots out of a damaged fighter plane quickly.

I was at music during most of the building sessions, so I missed out on a lot of the building. My partner constructed most of the rocket, but I did help with gluing fins as well as lacing the parachute. The building sessions were weird for a few reasons. We had to make our rocket from scratch, not a traditional kit. We had to roll the body tubes and cut out our fins. We also had to lace our own parachutes. At least we had instructions and my dad was there to help out Mr. Conte who ran the build sessions. It was super-hard for me not to take over like I usually do when I was there and let my partner get experience building. My dad was there to help every day. He even showed us a better way to lace our parachutes. 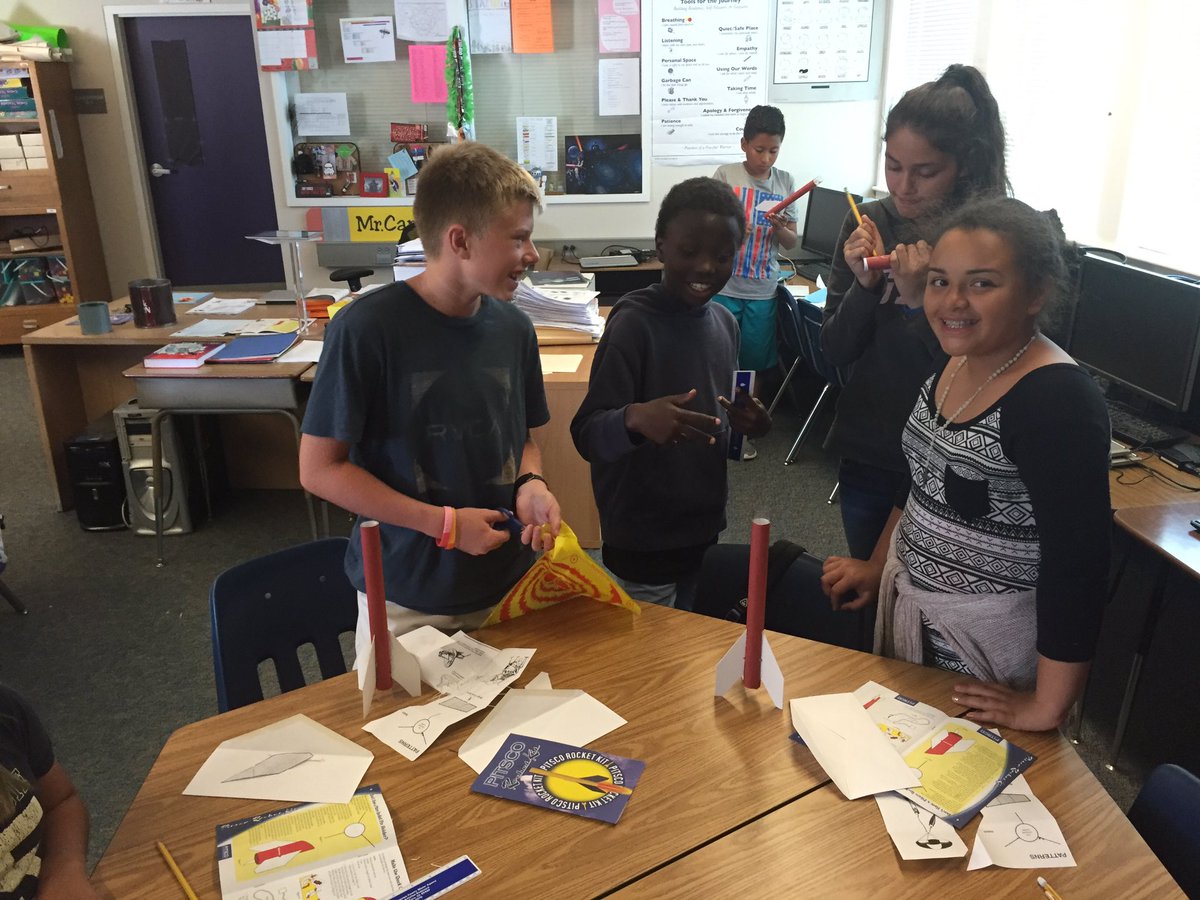 Some of my classmates building their rockets. (Photo Credit: Mr. Conte)

On launch day, my dad and the sixth grade teachers set up the launch pads in the middle of the grass field at my school. A ton of other classes came out to watch as well some parents. The first launch was was one of my dad’s card stock rockets on an A motor. There was a lot of “oohs” and “ahhs” from the crowd. Mind you that a good amount of them had never seen a rocket fly in person, model or not. Then all the student teams launched their rockets. We put JollyLogic altimeters in some of the student rockets to show the difference between A and B motors. In between some of the student team flights, my dad did demo flights of 2 different helicopter recovery rockets. Then for the grand-finale, my dad and I did a drag race with Mean Green (my dad’s rocket) and Squiddo (my rocket). Squiddo went higher by almost 100 feet!

“Sixth Grade Rockets” was a great end-of-the-school-year activity. I learned some things about rockets and also new building techniques. I also enjoyed watching the other kids reacting to their first model rocket experience.

One of the teachers created a video of our launch day:

Here is the link in case the video doesn’t play