The night skies of February are filled with beautiful star patterns, and so this month we take a closer look at another famous constellation, now rising high in the east after sunset: Gemini, the Twins!

If you’re observing Orion, as discussed in last month’s article, then Gemini is easy to find: just look above Orion’s “head” to find Gemini’s “feet.” Or, make a line from brilliant blue-white Rigel in the foot of Orion, through its distinct “Belt,” and then on through orange Betelgeuse. Keep going and you will end up in between the bright stars Castor and Pollux, the “heads” of the Gemini Twins. While not actually related – these stars aren’t bound to each other, and are almost a magnitude apart in brightness – they do pair up nicely when compared to their surrounding stars. Take note: more than one stargazer has confused Gemini with its next-door neighbor constellation, Auriga. The stars of Auriga rise before Gemini’s, and its brightest star, Capella, doesn’t pair up as strikingly with its second most brilliant star as Castor and Pollux do. Star-hop to Gemini from Orion using the trick above if you aren’t sure which constellation you’re looking at.

Pollux is the brighter of Gemini’s two “head” stars – imagine it has the head of the “left twin” – and located about 34 light-years away from our Solar System. Pollux even possesses a planet, Pollux b, over twice the mass of Jupiter. Castor – the head of the “right twin” – by contrast, lies about 51 light-years distant and is slightly dimmer. While no planets have been detected, there is still plenty of company as Castor is actually a six-star system! There are several great deep-sky objects to observe as well. You may be able to spot one with your unaided eyes, if you have dark skies and sharp eyes:  M35, a large open cluster near the “right foot” of Gemini, about 3,870 light-years away. It’s almost the size of a full Moon in our skies! Optical aid like binoculars or a telescope reveals the cluster’s brilliant member stars. Once you spot M35, look around to see if you can spot another open cluster, NGC 2158, much smaller and more distant than M35 at 9,000 light-years away. Another notable object is NGC 2392, a planetary nebula created from the remains of a dying star, located about 6,500 light-years distant. You’ll want to use a telescope to find this intriguing faint fuzzy, located near the “left hip” star Wasat.

Gemini’s stars are referenced quite often in cultures around the world, and even in the history of space exploration. NASA’s famed Gemini program took its name from these stars, as do the appropriately named twin Gemini North and South Observatories in Hawaii and Chile. You can discover more about Gemini’s namesakes along with the latest observations of its stars and related celestial objects at nasa.gov.

Castor and Pollux are Gemini’s most prominent stars, and often referred to as the “heads” of the eponymous twins from Greek myth. In Chinese astronomy, these stars make up two separate patterns: the Vermillion Bird of the South and the White Tiger of the North. What do you see? The Night Sky Network’s “Legends in the Sky” activity includes downloadable “Create Your Own Constellation” handouts so you can draw your own star stories: bit.ly/legendsinthesky

Image created with assistance from Stellarium. 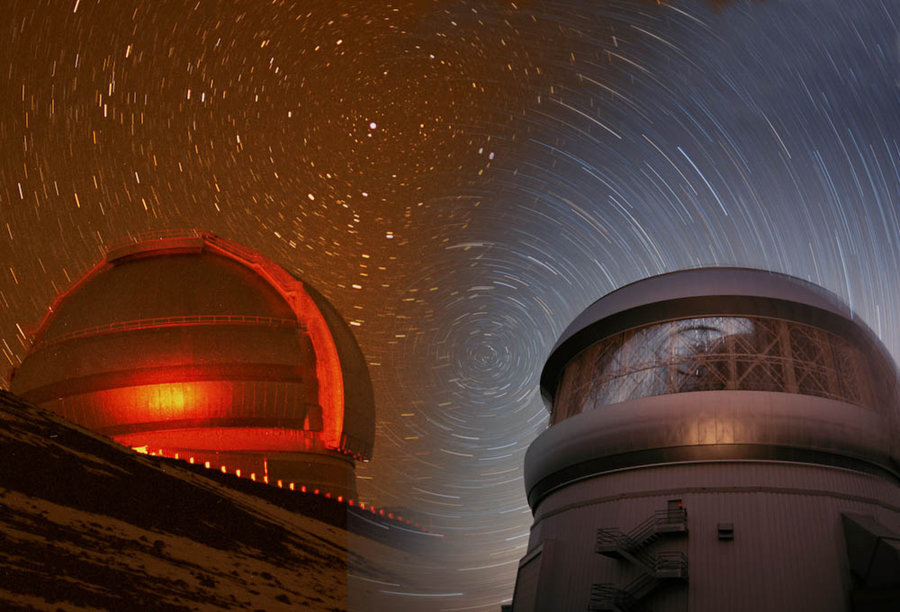 Montage of Gemini North, located on Mauna Kea in Hawaii, and Gemini South, located on Cerro Pachón in Chile. These “twin” telescopes work together as the Gemini Observatory to observe the entire sky.