Saturn is at opposition this month, beckoning to future explorers with its beautiful rings and varied, mysterious moons. The Moon prominently passes Saturn mid-month, just in time for the 50th anniversary of Apollo 11!

Saturn is in opposition on July 9, rising in the east as the Sun sets in the west. It is visible all night, hovering right above the teapot of Sagittarius. Saturn is not nearly as bright as Jupiter, next door in Scorpius, but both giant planets are easily the brightest objects in their constellations, making them easy to identify. A full Moon scrapes by the ringed planet late in the evening of the 15th through the early morning of the 16th. Some observers in South America will even see the Moon occult, or pass in front of, Saturn. Observe how fast the Moon moves in relation to Saturn throughout the night by recording their positions every half hour or so via sketches or photos.

While observing the Saturn-Moon celestial dance the early morning of the 16th, you can also contemplate the 50th anniversary of the launch of the Apollo 11 mission! On June 16, 1969, Apollo 11 blasted off from Cape Canaveral in Florida on a journey of almost a quarter million miles to our nearest celestial neighbor, a mission made possible by the tremendous power of the Saturn V rocket – still the most powerful rocket ever launched. Just a few days later, on July 21, 1969, Neil Armstrong and Buzz Aldrin set foot on the lunar surface and became the first people in history to walk on another world. The astronauts set up equipment including a solar wind sampler, laser rangefinder, and seismometer and gathered up 22 kilograms (48 pounds) of precious lunar rocks and soil samples. After spending less than a day on the Moon’s surface, the duo blasted off and returned to the orbiting Columbia Command Module, piloted by Michael Collins. Just a few days later, on July 24, all three astronauts splashed down safely in the Pacific Ocean. You can follow the timeline of the Apollo 11 mission in greater detail at bit.ly/TimelineApollo11 and dig deep into mission history and science on NASA’s Apollo History Site: bit.ly/ApolloNASA.

Have you ever wanted to see the flag on the Moon left behind by the Apollo astronauts? While no telescope on Earth is powerful enough to see any items left behind the landing sites, you can discover how much you can observe with the Flag on the Moon handout: bit.ly/MoonFlag 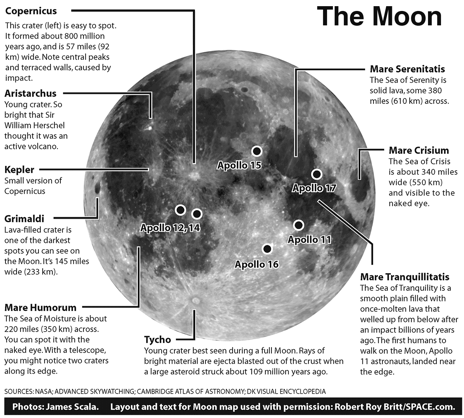 Caption: Observe the larger details on the Moon with help from this map, which also pinpoints the Apollo landing site. Full handout available at bit.ly/MoonHandout 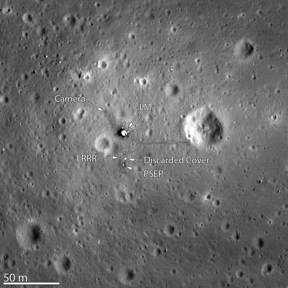 Caption: Earth-based telescopes can’t see any equipment left behind at the Apollo 11 landing site, but the cameras onboard NASA’s Lunar Reconnaissance Orbiter (LRO) can. This is Tranquility Base as seen from the LRO, just 24 kilometers (15 miles) above the Moon’s surface, with helpful labels added by the imaging team. Image Credit: NASA Goddard/Arizona State University. See more landing sites at: bit.ly/ApolloLRO