Late spring brings warmer nights, making it more comfortable to observe a good showing of the Eta Aquarids meteor shower. Skywatchers can also look for the delicate Coma Star Cluster, and spot the Moon on the anniversary of Apollo 10’s “test run” prior to the Moon landing in 1969.

The Eta Aquarids meteor shower should make a good showing this year, peaking the morning of May 6. This meteor shower has an unusual “soft peak,” meaning that many meteors can be spotted several days before and after the 6th; many may find it convenient to schedule meteor watching for the weekend, a night or two before the peak. You may be able to spot a couple dozen meteors an hour from areas with clear dark skies. Meteors can appear in any part of the sky and you don’t need any special equipment to view them; just find an area away from lights, lie down on a comfy lawn chair or blanket, relax, and patiently look up. These brief bright streaks are caused by Earth moving through the stream of fine dust particles left by the passage of Comet Halley. While we have to wait another 43 years for the famous comet grace our skies once more, we are treated to this beautiful cosmic postcard every year.

While you’re up meteor watching, try to find a delightful naked eye star cluster: the Coma Star Cluster (aka Melotte 111) in the small constellation of Coma Berenices. It can be spotted after sunset in the east and for almost the entire night during the month of May. Look for it inside the area of the sky roughly framed between the constellations of Leo, Boötes, and Ursa Major. The cluster’s sparkly members are also known as “Berenice’s Hair” in honor of Egyptian Queen Berenices II’s sacrifice of her lovely tresses.  Binoculars will bring out even more stars in this large young cluster.

May marks the 50th anniversary of the Lunar Module’s test run by the Apollo 10 mission! On May 22, 1969, NASA astronauts Thomas Safford and Eugene Cernan piloted the Lunar Module – nicknamed “Snoopy” – on a test descent towards the lunar surface. Undocking from “Charlie Brown” – the Command Module, piloted by John Young – they descended to 47,400 feet above the surface of the Moon before returning safely to the orbiting Command Module. Their success paved the way for the first humans to land on the Moon later that year with Apollo 11. Look for the Moon on the morning of May 22, before or after dawn, and contemplate what it must have felt like to hover mere miles above the lunar surface. You’ll also see the bright giant planets Saturn and Jupiter on either side of the Moon before sunrise. When will humans travel to those distant worlds? 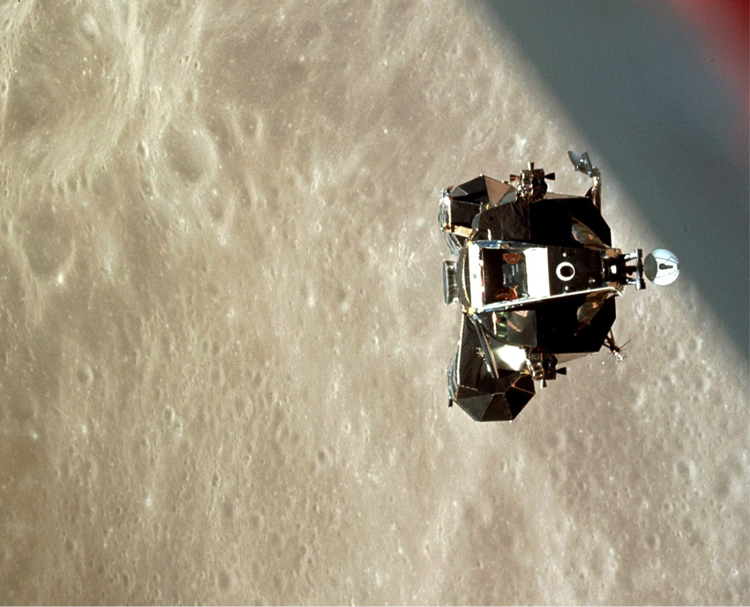 A view of Apollo 10’s Lunar Module from the Command Module as it returned from maneuvers above the lunar surface.    Photo Credit: NASA     Source: http://bit.ly/apollo10view 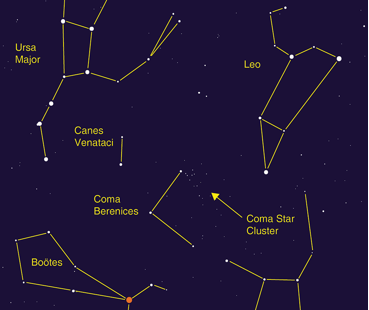 Try to spot the Coma Star Cluster! Image created with assistance from Stellarium