NASA JPL
As far as we know, water is essential for every form of life. It’s a simple molecule, and we know a lot about it. Water has two hydrogen atoms and one oxygen atom. It boils at 212° Fahrenheit (100° Celsius) and freezes at 32° Fahrenheit (0° Celsius). The Earth’s surface is more than 70 percent covered in water.

On our planet, we find water at every stage: liquid, solid (ice), and gas (steam and vapor). Our bodies are mostly water. We use it to drink, bathe, clean, grow crops, make energy, and more. With everything it does, measuring where the water on Earth is, and how it moves, is no easy task.

GRACE-FO stands for the “Gravity Recovery and Climate Experiment Follow-on.” “Follow-on” means it’s the second satellite mission like this—a follow-up to the original GRACE mission. GRACE-FO will use two satellites. One satellite will be about 137 miles (220 km) behind the other as they orbit the Earth. As the satellites move, the gravity of the Earth will pull on them.

Scientists combine this distance between the two satellites with lots of other information to create a map of Earth’s gravity field each month. The changes in that map will tell them how land and water move on our planet. For example, a melting glacier will have less water, and so less mass, as it melts. Less mass means less gravitational pull, so the GRACE-FO satellites will have less distance between them. That data can be used to help scientists figure out if the glacier is melting.

GRACE-FO will also be able to look at how Earth’s overall weather changes from year to year. For example, the satellite can monitor certain regions to help us figure out how severe a drought is. These satellites will help us keep track of one of the most important things to all life on this planet: water.

You can learn more about our planet’s most important molecule here: https://spaceplace.nasa.gov/water 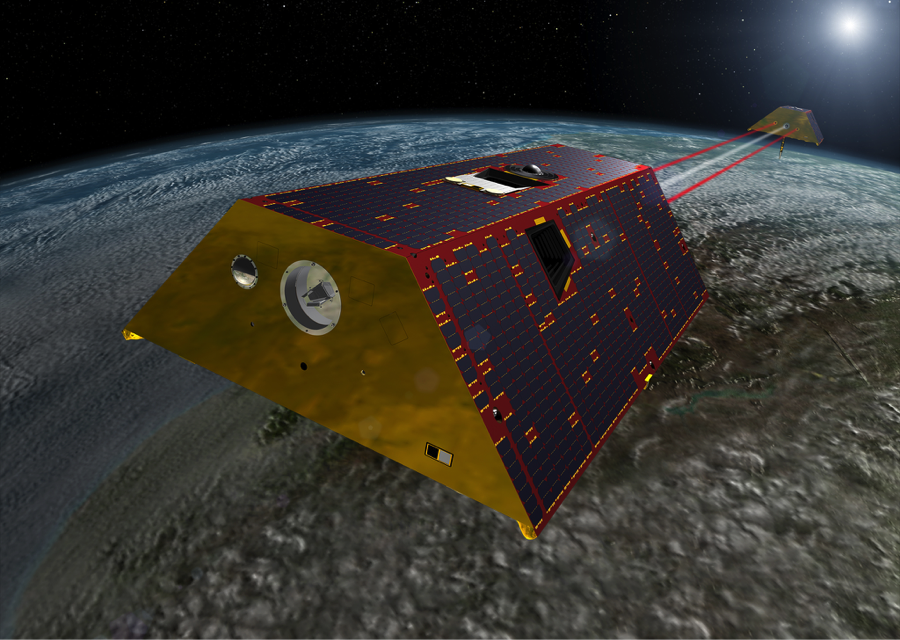 An artist’s rendering of the twin GRACE-FO spacecraft in orbit around Earth. Credit: NASA

This article is provided by NASA Space Place. With articles, activities, crafts, games, and lesson plans, NASA Space Place encourages everyone to get excited about science and technology. Visit spaceplace.nasa.gov to explore space and Earth science!