One hundred years ago, Albert Einstein first put forth his theory of General Relativity, which laid out the relationship between spacetime and the matter and energy present within it. While it successfully recovered Newtonian gravity and predicted the additional precession of Mercury’s orbit, the only exact solution that Einstein himself discovered was the trivial one: that for completely empty space. Less than two months after releasing his theory, however, the German scientist Karl Schwarzschild provided a true exact solution, that of a massive, infinitely dense object, a black hole.

Our galaxy has since been discovered to house a black hole about four million solar masses in size, with an event horizon about 23.6 million kilometers across, or about 40 percent the size of Mercury’s orbit around the sun. At a distance of 26,000 light years, it’s the largest event horizon in angular size visible from Earth, but at just 19 micro-arc-seconds, it would take a telescope the size of Earth to resolve it – a practical impossibility.

But all hope isn’t lost! If instead of a single telescope, we built an array of telescopes located all over Earth, we could simultaneously image the galactic center, and use the technique of VLBI (very long-baseline interferometry) to resolve the black hole’s event horizon. The array would only have the light-gathering power of the individual telescopes, meaning the black hole (in the radio) will appear very faint, but they can obtain the resolution of a telescope that’s the distance between the farthest telescopes in the array! The planned Event Horizon Telescope, spanning four different continents (including Antarctica), should be able to resolve under 10 micro-arc-seconds, imaging a black hole directly for the first time and answering the question of whether or not they truly contain an event horizon. What began as a mere mathematical solution is now just a few years away from being observed and known for certain!

Note: This month’s article describes a project that is not related to NASA and does not suggest any relationship or endorsement. Its coverage is for general interest and educational purposes. 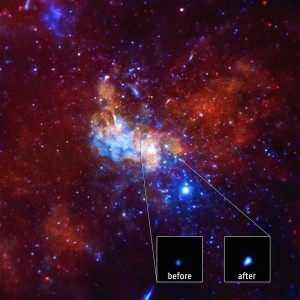 Astronomers have detected the largest X-ray flare ever from the supermassive black hole at the center of the Milky Way, known as Sagittarius A* (Sgr A*), using NASA’s Chandra X-ray Observatory. This event was 400 times brighter than the usual X-ray output from Sgr A*. The main portion of this graphic shows the area around Sgr A* in a Chandra image where low, medium, and high-energy X-rays are red, green, and blue respectively. The inset box contains an X-ray movie of the region close to Sgr A* and shows the giant flare, along with much steadier X-ray emission from a nearby magnetar, to the lower left. A magnetar is a neutron star with a strong magnetic field.

Image credit: NASA/CXC/Amherst College/D.Haggard et al., of the galactic center in X-rays. Sagittarius A* is the supermassive black hole at our Milky Way’s center, which normally emits X-ray light of a particular brightness. However, 2013 saw a flare increase its luminosity by a factor of many hundreds, as the black hole devoured matter. The event horizon has yet to be revealed.

This article is provided by NASA Space Place.

With articles, activities, crafts, games, and lesson plans, NASA Space Place encourages everyone to get excited about science and technology.